Coming Up on "Write The Vision". . . LaSHELL GRIFFIN 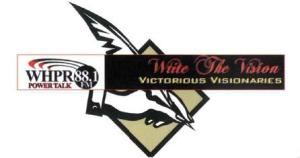 WE’RE RAIZIN’ THE PRAIZ’ AT THE “SISTER GIRL…” SERIES
Tune in anytime to the Write The Vision Podcast:
http://www.BlogTalkRadio.com/Write-The-Vision

Coming Up in the New Season of Write The Vision

LaShell Griffin of “Dreams Are Possible”

LaShell was born and raised in Detroit, Michigan. She grew up on the eastside in the projects and had a tough time growing up. Church was always a highlight for her and she knew music was her mission. From the time she was 9, LaShell longed to sing in the choir. When she was old enough to join at 13, LaShell was given solos on a regular basis. By the time she was in her late teens, LaShell started to gain her confidence. “I started off holding my head down when I sang,” LaShell says. “Then I started looking at the ceiling, then the clock in front of me. Finally, I just started singing with my eyes closed, so I could tune out everything and everyone and just deliver.” It’s a method that has stayed with her ever since.
When LaShell was 17, she got pregnant and married Lee when she was 18. (Today they have 5 children and have been married for 20 years.) “When I got married, I put my personal ambitions on the shelf and focused on my family,” says LaShell. She continued to sing at church and at weddings. Her performances became sought after and soon LaShell was juggling several weddings per weekend in addition to her responsibilities at church and at home.

BELIEVE IN YOUR DREAMS

In November 2003, LaShell broke her foot and her schedule slowed down as a result. While watching Oprah, LaShell heard them promote a singing contest. I told my husband, and he said, “This is it.” They recorded her singing “Amazing Grace” at church and sent in a tape. A few weeks after they sent the tape, LaShell was pulling in her driveway after picking up her husband from work. “The phone was ringing and I just assumed it was another bill collector,” says LaShell. “But it was a producer from Oprah’s show!”

The competition was designed to help mature people (age 28 or older) to find the opportunity to fulfill their dream of becoming a professional recording artist. Over 15,000 people sent in their tapes to Harpo Studios. Only 8 semi-finalists were handpicked by the producers and LaShell was one of them! She performed before a television audience of millions and was judged by celebrities like Alicia Keys, Toni Braxton, Cyndi Lauper, American Idol’s Simon Cowell and Oprah. She seized the moment by singing “Where Do Broken Hearts Go?,” “The Greatest Love of All,” and “One Moment in Time.” Her amazing renditions caused tears to flow and even Oprah could not keep her composure.

LaShell, 37, says her success was not overnight. “So many people want the same success, but they have to understand that it took time, prayer, submission and obedience to the Holy Spirit,” says LaShell. She loves to share her faith especially to underprivileged children. LaShell says she put her dreams on the backburner when she got married. She looked after the children and provided a stable home. Her husband also sang in a Gospel male group band and in their church choir. He was also a shoe salesman and owned a commercial cleaning business. LaShell stayed faithful and knew her time would come. About two years ago, she wanted to audition for “Star Search,” and while she was ready and willing, Lee felt it was not the right timing for their family.

In the past, LaShell’s family had their utilities cut off despite her husband working two jobs. Now she’s able to make more on stage in a night than her husband could in a month and a half. Lee is now her full-time manager. LaShell faced a real struggle when her strong religious beliefs clashed with what the music industry would ask of her. She didn’t want to wear anything too sexy nor sing songs that didn’t celebrate love and Christianity. Record sales didn’t translate into another deal for LaShell, and she got discouraged. “Lee helped me a lot,” she says. “He said, “Whatever is in your heart, you can fulfill them. You’re not supposed to let people hold you down.” So LaShell dried her tears, got off the couch and got back on track again. Lee and LaShell started their own record label and her music is now sold in Wal-mart stores everywhere.

PASS THE WORD AND RAIZ’ THE PRAIZ’ WITH US AS WE
RAIZ’ EXPECTATIONS AND PRAIZ’ GOD FOR THE ELEVATION!
CLICK HERE FOR A LIST OF UPCOMING SHOWS

Please rate the article. What do you think?

Posted by Ella Curry, EDC Creations on January 17, 2007 in #StorytellersBookTour