Intimate Conversation with author Recha G. Peay
At the age of five, the gift of a Barbie Doll typewriter from a family friend sparked Recha’s interest in the written word. For hours she’d sit in front of her toy typewriter and peck away occasionally stopping to greet the public and sign autographs. Throughout her childhood and early adulthood she held on to her dream even though career choices lead her in a different direction.
In 1996, The Mystery of a Woman was born and manifested as a small collection of poetry. To no avail, and many rejection letters later they were never published. Recha didn’t stop there and asked herself what would make her poetry unique. During a moment of meditation the answer was clear, a novel. In 1997, the collection of poetry became the premise of her first novel. Just like so many aspiring authors she worked tirelessly then packed it all away.

In 2003, the unfortunate news of a job closing inspired Recha to ‘think outside of the box.’ So she did just that. With the encouragement and support of two children she unpacked her storage box and breathed new life into her project. Her steps were ordered as God allowed her to make contact with Kimberly Matthews of Kissed Publications, who tirelessly assisted her through several edits finally seeing it through to completion. The rest is a ‘Mystery’.

Recha wants all of her readers to know with God’s divine guidance dreams do come true. So remember the three P’s prayer, persistence and patience.

Ella: Where are you from? How did you start your writing journey?
I’m a native Memphian. I smile whenever people ask about my journey as a writer. Since the age of five I’ve been pretending to write and sign autographs. My love for the spoken word began in church as I recited the work of others. Two poems in particular that come to mind are William Herbert Brewster’s ‘I’m Determined To Be Somebody Someday’ and Maya Angelou’s ‘Still I Rise’. Having to recite their work only sparked my creativity and prompted me to write my own. 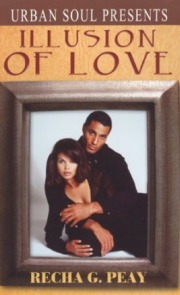 Ella: Recha, tell us about your book and the characters.

Illusion of Love Synopsis: At an annual Christmas party an image of perfection stepped into Tatiana’s life. From the outside looking in, Courtney McAdams appeared to have it all; career, good looks and charming personality. Nine months later they were married, moving into a suburban dream home and planning to start a family. His request for her to quit teaching art at the elementary school to become a full-time wife and mother seemed ideal when he revealed plans to convert an extra bedroom into an art studio. With all they’d accomplished she felt obligated and realized a child would be the most perfect gift any wife could give a husband. Courtney, on the other hand had a different agenda. Overcome by greed, Courtney and his best friend record sexually explicit adult videos and sell them on the internet. Having children was never in his plan and marrying Tatiana was only a cover to protect his image.
Ella: Ultimately, what do you want readers to gain from your book?
In ‘Illusion Of Love’ you see that ‘everything that glitters ain’t gold’. We have to acknowledge our gut instinct as woman’s intuition and pay attention to the signs no matter how impressive the physical package.

How many times have we been approached by someone who appeared to have it all then find out a few weeks or months later you met the representative? Sistah’s may I hear an ‘Amen’! It has happened to me and I’m certain it has happened to you. Whether we choose to admit it or not I feel that the entire plot is realistic.

Ella: What advice would you give a new writer?
Being successful in this business shouldn’t be measured by your financial gain but by the lives you touch. Many people have this false perception that you write a book and overnight you’re a millionaire! Hmmm…? Well that isn’t my testimony. For me writing is a passion. I’d rather write than eat a meal. Now that’s serious.

My advice to other writers/authors–hang in there and don’t let go of your dream. All of us have a story and whether through traditional/non-traditional publishing it needs to be told.

Ella: What can we expect from you in the future?
I’m excited about “Losing 4 Literacy” a twelve week weight loss competition/literacy awareness project originated by C. Jay of The Risque Cafe. Being involved in a project of that magnitude is giving me the opportunity to promote weight loss/healthy living, encourage literacy and reiterate the importance of education. As an author I feel obligated to give back to my readers and the community.

I’m also very excited about the release of my fourth novel ‘Table for Three’ in October 2009.

‘Table For Three’ is a fiction novel that explores the lives of three women with three very different personalities and three lifestyles. You may ask when did their paths cross and how did they manage to become best friends?

Shiquanna Alize Jenkins, A.K.A. Fantasia is an exotic dancer, performs at a local gentleman’s club but prefers private audiences. She has no morals, is alcohol dependant and curses like a sailor.

Yvonne Miller, Certified Public Accountant never married and has no children. She’s a devout Christian waiting on God to deliver her soul mate who she believes to be her minister.

India Rasheed, the earthy spiritualist of the trio, is a full-time student who finally declared a major after ten years. Her self-appointed purpose in life other than persistent unemployment is to make a global impact by spiritually awakening lost souls.

Is Shiquanna happy showcasing her body to pay the rent? Despite hours of Bible study and prayer does Yvonne really have a dark side? Is India as spiritually grounded as she portrays? Other than a weekly girl’s night out what is the tie that has bound three apparently different women together as friends for so many years?

SO DON’T BE JUDGE THE BOOK BY ITS COVER, LOOKS CAN BE DECEIVING!

Thank you for the opportunity to speak to you and your readers. I want to thank you for the support and encouragement. Please feel free to email any comments/questions to me at http://www.rechagpeay.com/. Stay encouraged and keep in touch.

EDC Creations Book Promotions
Please rate the article. What do you think?

One response to “Intimate Conversation with author Recha”