Jamila T. Davis author of The High Price I Had To Pay 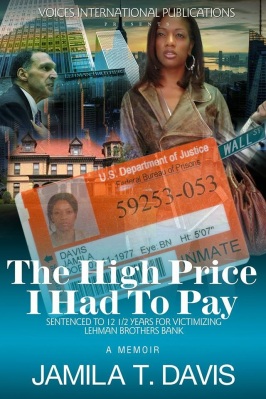 FIND OUT WHAT’S HAPPENING IN COURT ROOMS THROUGHOUT THE COUNTRY!

From the behind the dreary walls of federal prison, inspired by author Jamila T. Davis’ latest book release The High Price I Had To Pay, these women share their real-life stories.

Recently, during a committee hearing of the U.S. Senate Banking, Housing and Urban Affairs Committee, U.S. Senator Elizabeth Warren (D-MA) asked a panel of regulators, “has any banker gone to prison for their role in what happened with the financial collapse of 2008?” The panelist struggled to answer her question.

Well Jamila T. Davis, author of  The High Price I Had To Pay is serving a 12 1/2 year sentence for bank fraud as a result of a $22M mortgage scheme that she was involved in with financial giant, Lehman Brothers Bank. The only problem is, Davis is not a banker. She was a 25 year-old real estate investor who alleges that she was instructed by Lehman senior associates on exactly what to do to get the loans approved through the bank’s underwriting department.

In her book, The High Price I Had To Pay Davis explains in detail what happened!

“I guarantee that anyone who reads my book will be asking the same questions as Senator Warren,” said Davis. “All I know is that I’m sitting in federal prison serving a 12 1/2 year sentence, and the senior bankers from Lehman Brothers who told me what to do are sitting on the beach somewhere, for all I know,” Davis alleges.

“Fifty nine days after I was sentenced to 151 months, Lehman Brothers Bank collapsed due to what the world soon discovered was a massive system wide practice of overstating property values and doctoring loan documents,” says Davis. “Before the collapse, Lehman Brothers Bank attorneys convinced my judge that the bank was a victim and I was a 25 year old mastermind victimizer,” Davis alleges.

“My story will captivate and most likely infuriate you. Through my books, I am called to inspire, uplift and encourage my readers to become their very best, despite their past obstacles. At the same time, I am called to inform, to educate and to create change. I share my mission with others so that they can be informed and empowered by my ordeal,” says Davis. “Yes I am no angel, but I accepted full responsibility for what I did. I have from the very beginning. There is no way in a just society that I should be serving 12 1/2 years for my role in the scheme. And, the bankers who gave the instructions on how to meet the banks guideline criteria, and sent the documents back until I got them right, walked away claiming to be victims,” Davis alleges.

“All I know is that when the dust settled, I ended up with a sentence nearly seven times greater than the 24 month sentences that the seasoned lawyer who distributed the funds and the mortgage broker who admittedly told me what to do got, Davis alleges. Is that justice?” Davis stated.

About the Author
Jamila T. Davis, author of the Voices of Consequences Enrichment Series, is a self-help expert, motivational speaker and women’s prison reform activist. She is also currently a federal inmate. At the age 25, she was a multimillionaire, high-flying real estate investor with ties to the hip-hop world. While imprisoned, Davis has helped to change the lives of many through her inspirational books and cautionary tales, which are based on her real-life experiences. For more information about Jamila T. Davis and to check out her latest release The High Price I Had To Pay, visit http://www.voicesbooks.com or http://www.facebook.com/authorJamilaTDavis.

Click here to purchase the hardcopy of The High Price I Had To Pay on Amazon.com
http://www.amazon.com/High-Price-Had-Pay-Victimizing/dp/0985580798

The Financial Crisis Inquiry Report: Final Report of the National Commission on the Causes of the Financial and Economic Crisis in the U.S., January 2011.

Wall Street and the Financial Crisis: Anatomy of a Financial Collapse,” prepared by the Permanent Subcommittee on Investigations of the U.S. Senate, April 2011

Posted by Ella Curry, EDC Creations on September 19, 2013 in Uncategorized