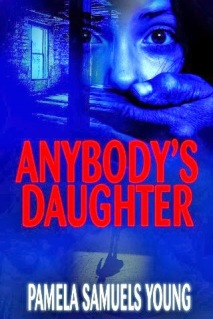 Is Anybody’s Daughter Ever Safe?

Based on the real-life horrors faced by thousands of girls, award-winning author Pamela Samuels Young takes readers deep inside the disturbing world of child sex trafficking in a fast-paced thriller that educates as much as it entertains.

Thirteen-year-old Brianna Walker is ecstatic. She’s about to sneak off to meet her first real boyfriend—a boyfriend she met on Facebook.  But Brianna is in for a horrifying surprise because her boyfriend doesn’t exist. Instead, Brianna unwittingly becomes the captive of a ring of drug dealers- turned-human traffickers who prey on lonely girls from dysfunctional homes. But they’ve made a big mistake in targeting Brianna because she doesn’t meet either of those criteria.

Brianna’s Uncle Dre, a man with his own criminal past, is determined to find the niece who is more like a daughter to him. Rather than sit back and rely on police to bring Brianna home, Dre scours the dark corners of Los Angeles looking for her. He is stunned to learn that the trafficking of children isn’t just happening in other countries. It’s occurring at epidemic levels right in his own backyard.

Dre is not alone in his desperate search. Loretha Johnson knows this world well. A social worker who previously lived “the life,” Loretha now dedicates her time to saving as many young girls as she can find. She turns out to be an invaluable resource for Dre, who ultimately gets a lead on The Shepherd, a mastermind in the trafficking world whose every move is fueled by ego and greed.  Dre vows to bring The Shepherd’s reign of terror to an end, even if he has to break the law to do it.

While Brianna makes a futile effort to thwart her captors, Dre is getting closer and closer to finding her. The woman he loves, attorney Angela Evans, knows the dangers faced by sexually exploited children because she represents them in juvenile court. Angela lends her moral support and, eventually, an important clue to Brianna’s whereabouts.

As he races against the clock, Dre ultimately comes up with a daring plan—one that puts many lives in danger, including his own. But will he find Brianna before it’s too late?

Dre stared across the table at Angela, an eager smile stretched across his lips. From the second he’d knocked on her door at exactly seven that evening, he’d been trying to tamp down his excitement. Unfortunately, he couldn’t help himself.

He could tell by her furtive glances around the restaurant that Angela was impressed with his selection. Café Del Rey had a chic, relaxed vibe with the added plus of being able to gaze out at the boats docked along the marina.

“It’s good seeing you again,” he said, taking a sip of his Pepsi.

She was still as fine as ever. Dre liked her pert nose and natural spiral curls. Her low-cut coral sweater matched the color of the blush that highlighted her cheekbones.

Angela’s words came out flat, nonchalant. But then she cocked her head and smiled with those lips. Those full, soft lips that he hadn’t been able to kiss for three months.

Dre had started to believe that Angela didn’t intend to see him again. Ever. But his heart knew better. Despite all the drama that had gone down, there was still something special between them.

“So how’s the law business?”

Angela tinkered with her napkin. “I’m handling a lot of juvenile cases now,” she said. “It’s kind of depressing at times. What about you? How’s your business?”

Dre stiffened and palmed his glass with both hands. That was a dig. The kind of dig black women knew how to fire off with the skill of a sharpshooter.

“You know I’m not about that anymore.” He smiled so the hurt wouldn’t show on his face. But the edge in his voice gave him away. “I quit dealing before we broke up.”

Dre turned away and gazed around the restaurant. It hadn’t been like this before. Bland conversation, long gaps of silence, the air so thick with tension you could hardly stand to breathe it. He should just ask for the bill and take her prissy ass home. Only Dre didn’t want to take her home.

“So what kind of juvenile cases are you handling?”

“Most of my clients are minors charged with soliciting prostitution.”

“Any dude who’d mess with a child is sick.”

“Absolutely. These girls are victims, but they’re treated like criminals. The johns only get a slap on the wrist and the pimps rarely get prosecuted because the girls are too afraid to testify against them. But one of my girls did really well in court today. I’m proud of her.”

Dre’s smartphone vibrated. He ignored it.

A waitress with bright-pink lips and matching nail polish walked up to the table. “How are you guys doing tonight? Have you had a chance to peruse the menu?”

They both listened as the woman recited the specials. Dre ordered chicken piccata. Angela chose the grilled tilapia.

Dre beamed. “Growing up way too fast.” He pulled his smartphone from his pocket and showed her a picture. “This is Little Dre and my niece, Brianna.”

“Wow,” Angela said. “Both of them look just like you. She has your hazel eyes.”

“Yep. She’s more like my daughter than my niece. Smart as a whip too. She wants to be a lawyer. Maybe I can bring her down to your office and you can talk to her sometime.”

He swiped through a few more pictures.

“Who’s that?” Angela pointed to a woman pictured with Dre and Brianna.

Dre smiled. “That’s my sister, Donna. I’m taking them all to a Lakers’ game next week. Why don’t you—”

The smartphone vibrated again. This time, he read the screen, then placed it face down on the table.

“My sister, Donna,” he explained with a shrug. “She can wait.”

Angela arched a brow and gave him a yeah-sure-it’s-your-sister smile.

Dre frowned. “You don’t believe me?”

Angela responded with a hunch of her shoulders.

Angela chuckled. “Depends on whether we’re talking about a straight-out lie or a lie by omission. Like your never telling me you were a drug dealer.”

“An ex-drug dealer,” Dre corrected her. “And I did plan to tell you.”

He scratched his jaw. He didn’t like being judged.

“If you’re still trippin’ about everything that went down, then why’d you come tonight?”

Angela waited a long beat. “Because I missed you.”

Dre smiled at the first green light of the evening and exhaled the anxiety right out of his body. He leaned in over the table. “Angela, I—”

The loud vibration of his smartphone cut him off a second time.

He grimaced. “My sister’s a drama queen. Whatever she wants can wait.”

“Sure it’s your sister.” Angela clasped her hands and set them on the table. “Guess I’m not the only woman who misses you.”

“I’m not seeing anybody. I haven’t been with anybody since you.”

Angela propped her right elbow on the table and extended her palm. “If that’s really your sister, then let me return her call.”

He had babes jockin’ him every day of the week. He didn’t have to take this crap. Still, he turned back to her, picked up his smartphone and placed it in her outstretched hand.

“Go ’head. Knock yourself out.”

As she raised the smartphone to her ear. Dre locked his arms across his chest and leaned back in his chair.

Dre’s lips angled into a smug smile as he waited for her doubt to fade. But in seconds, Angela’s expression went from skeptical to distressed. Her eyebrows fused into a single line and when she pressed the palm of her free hand flat against her chest, Dre sprang forward.

Knowing Donna, she might think it was funny to pretend that she was his woman, not his sister. If she did that, he’d never get Angela to trust him again.

Angela raised her hand, quieting him.

Dre waited a few more seconds, but couldn’t take it. As he reached across the table, ready to take the phone, Angela thrust it into his hand.

“You better talk to your sister.” Angela’s voice echoed the same level of panic that now filled her eyes. “Brianna didn’t show up at school today and nobody can find her.”

© 2013 All rights reserved. Book excerpt reprinted by permission of the author, Pamela Samuels Young. This excerpt is used for promotional purposes only. Do not reproduce, copy or use without the publisher’s written permission. Copyright infringement is a serious offense. Share a link to this page or the author’s website if you really like this promotional excerpt.

Purchase Anybody’s Daughter (Angela Evans Series No. 2)
Amazon Link:   http://amzn.com/B00GC7UI8E
About the Author
PAMELA SAMUELS YOUNG is a practicing attorney whose fast-paced legal thrillers tackle law and crime. Recognized for her savvy female characters, Pamela brings a taste of diversity to the legal fiction genre. Her novels include Anybody’s Daughter, Attorney-Client Privilege, Murder on the Down Low. A natural hair enthusiast, she is the author of Kinky Coily: A Natural Hair Resource Guide.

Posted by Ella Curry, EDC Creations on November 10, 2013 in Uncategorized