A Place at the Table: A Novel by Susan Rebecca White 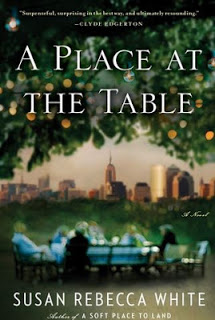 Reviews for A Place at the Table
“No writer should be able to write smoothly and cleanly from three very different perspectives about lost love, betrayal, pound cake, fear, family ties, racism, Baptists, “the other,” Episcopalians, the south, and New York. But Susan Rebecca White has–and without a false note nor a single sentimental pink bow. All this in her new and best novel yet: A Place at the Table. The story is suspenseful, surprising in the best way, and ultimately resounding. It’s so good I wish I could tell you more about it. The story will bring you face to face with all sorts of demons and lovely things–and with some very real people whom you just may recognize as family.”
(Clyde Edgerton author of The Night Train )
“A Place at the Table reads like a master chef’s five course meal: each section makes its own delicious sense, but taken all together the intertwining stories in this novel create something uniquely magical. Susan Rebecca White made me think, made me cry, made my jaw drop, made me laugh out loud. A story of outsiders in this world, this fantastic book defies convention in plot, characterization, and even narrative structure, to forge something amazing in its pages: new identities, relationships you have not seen before, new stories, characters you will never forget. Like a brilliant new recipe: it works! Savor this confident storytelling — you’ll know you’re in good hands from the first page. A book you’ll devour quickly and then want to share with friends!”

A PLACE AT THE TABLE  promises to be the break-out book for a writer whose work has already received the highest praise from renowned Southern authors including Kathyrn Stockett, Lee Smith, and Clyde Edgerton.
Taking a bold leap of the imagination, Susan Rebecca White narrates this book from three points of view: Alice Stone, a famous African-American chef whose past is a mystery to those who know her; Bobby Banks, a gay Southern man looking for acceptance in New York City; and Amelia Brighton, a newly-divorced Connecticut woman whose life will be upended by a family secret. Sweeping from North Carolina in the 1920s through New York’s mid-century café society and the devastating AIDs epidemic of the 1980s to the mansions of Old Greenwich Connecticut, A PLACE AT THE TABLE connects these characters to each other as they come together in the understanding that when you embrace the thing that makes you different, you become whole.
While A PLACE AT THE TABLE is a work of fiction, White’s imagination was sparked by reading about Edna Lewis, the legendary African-American chef and author of the classic A Taste of Country Cooking. Further research of Ms. Lewis led White to read of New York’s real-life Café Nicholson, the Sutton Place salon Edna opened with Johnny Nicholson in 1949. During those glorious post-war years, Café Nicholson was the epicenter of Manhattan’s culinary and literary elite and a favorite haunt of luminaries such as Truman Capote, William Faulkner, Marlon Brando, Gloria Vanderbilt, and Tennessee Williams.
Edna left her indelible mark on the café’s culture and cuisine. Is it any wonder that she would continue to lead a fascinating life that defied convention, including her late-life friendship with chef Scott Peacock, a young, gay, white man? Scott and Edna’s connection, spanning age, race, and sexual orientation, inspired White in her creation of the friendship between Bobby Banks and Alice Stone, which also crosses racial and generational borders.
We are all familiar with stories of lost souls gravitating to New York, but in A PLACE AT THE TABLE, White’s beautiful and brilliant food writing conveys each character’s longing for a home that doesn’t love them back.  As a boy growing up in small town Georgia, Bobby loved nothing more than cooking with his mother and grandmother.  But once he reaches puberty, his burgeoning sexuality makes him unsafe in his own home. He flees.  In New York, Bobby spends hours in the kitchen meticulously preparing Southern food from scratch.  It is the only way he can create a home for himself.  The same is true for Alice who grew up living off the land and eating with the seasons, a practice she continues in New York because it is her only link to the world she was forced to leave behind.
Amelia, reeling from her sudden and shocking divorce, also finds comfort in cooking, which leads her to Home Grown, a cookbook by Alice Stone.  Within its pages she finds a picture that explodes her world.  The mystery of her life is inextricably linked with Bobby Banks and Alice Stone.

Purchase  A Place at the Table: A Novel
http://www.amazon.com/Place-Table-Susan-Rebecca-White/dp/145160887X

About the Author
Susan Rebecca White is the author of the critically acclaimed novels A Soft Place to Land and Bound South. She lives in Atlanta, Georgia and teaches creative writing at Emory University. Visit her online at SusanRebeccaWhite.com.

Posted by Ella Curry, EDC Creations on May 5, 2013 in Book Spotlights